Playing a true tourist for a couple of days

Early Tuesday morning, GO and I caught an Uber to the airport. Our flight wasn't until 9.30 am but there was a protest planned for 8 am near the airport so we thought it was best to get going early.

GO had booked two 'all-inclusive' days for us at the Fairmont Mayakoba. On arriving at Cancun airport, it was immediately clear that this was a different Mexico to the one I'd experienced in Mexico City - humid, flashy and geared to tourists. I later discovered that Cancun and in fact the whole state of Quintana Roo wasn't granted statehood till 1972 and the tourist industry only started around that time also. It reminds me a lot of other holiday places we've been like Fiji and Bali.

The hotel transfer took us straight to the hotel (about an hour on the road) and we were greeted with welcome drinks and a room upgrade (from a hotel room to a villa so that was fantastic!). We spent the afternoon enjoying the beach and pool and the all-inclusive food and drink of course! 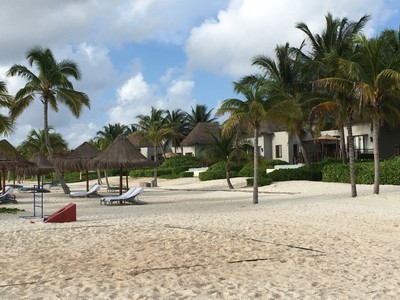 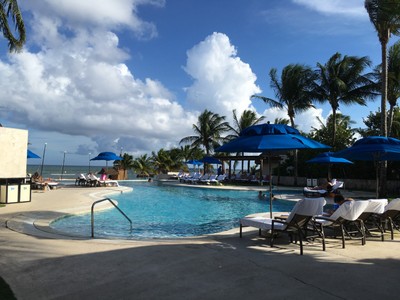 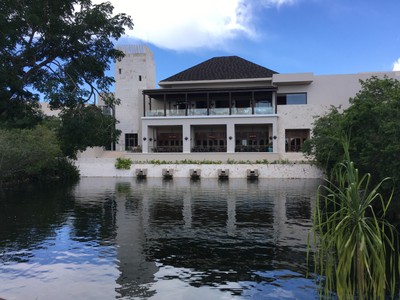 Wednesday morning, we were picked up at 7.15 am for our day trip to Yucatan. It was a long ride, stopping along the way to pick up other tourists and of course stopping at the mandatory tourist trap souvenir spots. The many hours on the road were, however, worth it when we arrived at Chichen Itza, the Mayan site with numerous buildings to explore. There was a guide provided who became a little annoying trying to push his socialist agenda and personal religious viewpoints but regardless of this, it was still an amazing visit. We also walked the short distance to a cenote (sinkhole) that is on the site. 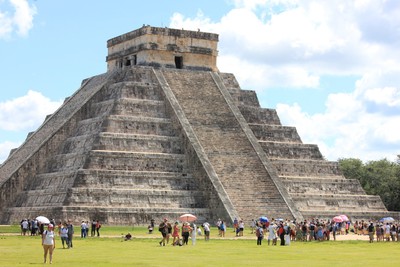 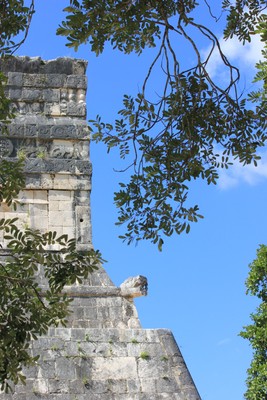 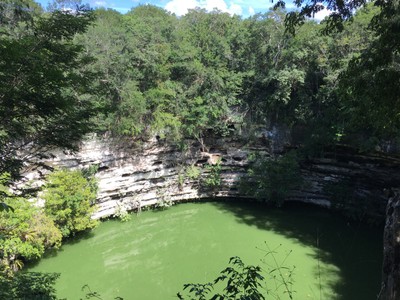 Back on the bus we were taken to a restaurant (slight exaggeration, more like a cafe) and then to the Ik Kil cenote, another sinkhole. This cenote has been very commercialized, but regardless, it is a beautiful place to visit and swim- quite magical if you can ignore the hundreds of people down there with you. 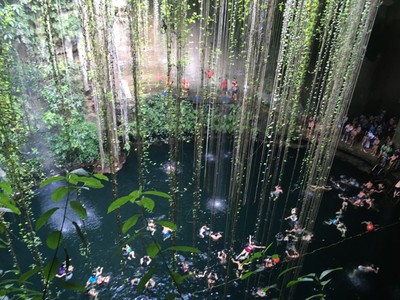 Once back on the bus it was another 3.5 hours travelling to the hotel.
We had dinner at the hotel restaurant that is on the beach and soaked in the festive atmosphere.

Thursday morning, we slept in and then enjoyed the breakfast buffet which was extensive- so much to choose from, Mexican and international food. GO then went to the beach and I went for a swim in one of the pools. At 10.30 am we met together to take a boat ride around the canals that surround the hotel. The Fairmont Mayakoba will be hosting the PGA golf tournament in a couple of weeks so we were able to see preparations for that. Most impressive was the view of the mangroves and other vegetation that surrounds the hotel. We also saw a couple of baby alligators! 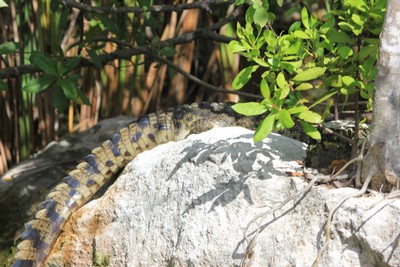 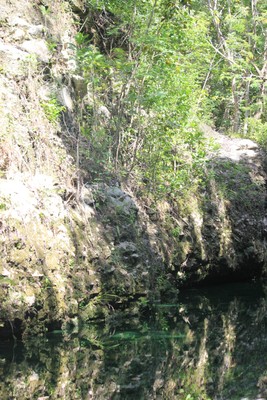 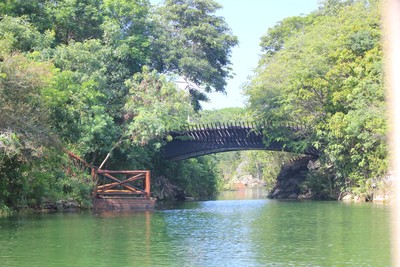 Once back in the room, we packed up and checked out. We took at taxi to Playa del Carmen and bought tickets for the catamaran to Cozumel. As we were boarding, we could see some storm clouds on the horizon and the 40 minute boat ride was definitely a rough one! We only had a couple of hours available on the island so we wandered along the foreshore and had lunch. This is a tourist hotspot, where the cruise liners come in. There are beautiful nature reserves, diving etc but unfortunately we didn't have time to see much of it. Fortunately the weather had cleared when we caught the boat back to the mainland so we sat on the upper deck enjoying the sun and breeze! It really felt like we were on holidays!

It was then back to the hotel to collect our bags and take the transfer the airport. Our flight landed back in Mexico City just before 10 pm but due to delayed bags and traffic (yes traffic jams at 11 pm!) we didn't get back to GO's apartment until 11.30 pm!

Posted by sonjamcf 14:34 Archived in Mexico

Previous Next Table of contents

Comments on this blog entry are now closed to non-Travellerspoint members. You can still leave a comment if you are a member of Travellerspoint.

If you aren't a member of Travellerspoint yet, you can join for free.